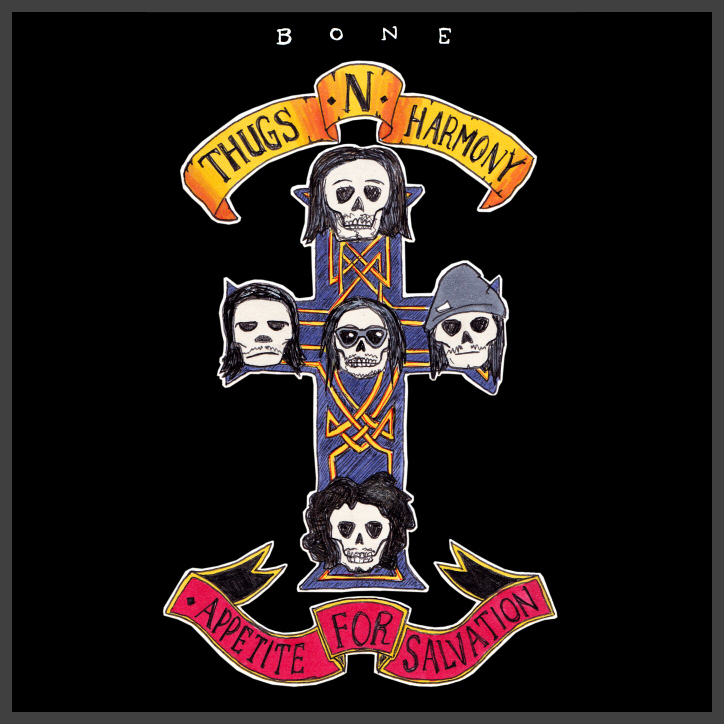 ‘Tha Crossroads’ is a requiem for those who passed too soon. The video clip opens with a church funeral and the emotional strains of “Mary Don’t You Weep” – a spiritual in which Mary of Bethany begs Jesus (Christ, religious leader of some note) to resurrect her brother Lazarus. Then the familiar ‘bone-bone bone-bone” intro kicks in, and the gospel themes continue, with both song and video observing a number of religious tenets: there shalt be epic mountain tops to pray upon; thou shalt fear the reaper; thou shalt utter no curse words despite typically being a cuss-heavy group; thou shalt unleash huge church harmonies at every opportunity; and thou shalt continuously seek answers for death and a reason for our existence. Of course, when this song hit RAGE and radio back in 1996, it was enough just to keep up with a tenth of what they were on about, such was the rapid-fire speed of the rapping.

It’s a uniquely human trait to search for meaning in death. This song was written in the wake of Eazy-E’s death, the mentor who signed and shepherded the group through the early days of their career. Eazy died of complications from AIDS, and in his eleventh hour wrote an open letter which was intended to infuse his passing with purpose. “I may not seem like a guy you would pick to preach a sermon”, the letter begins. “But I feel it is now time to testify because I do have folks who care about me hearing all kinds of stuff about what’s up.”

After stating explicitly that he isn’t religious, he nevertheless continues: “I’m not saying this because I’m looking for a soft cushion wherever I’m heading, I just feel that I’ve got thousands and thousands of young fans that have to learn about what’s real when it comes to AIDS. Like the others before me, I would like to turn my own problem into something good that will reach out to all my homeboys and their kin. Because I want to save their asses before it’s too late.”

Eazy says “I’m not looking to blame anyone except myself”, yet this ode to passing is filled with blame and questioning – or rather, one central question: “Why?” Other than being about the death of Eazy (despite his promiscuous ways, the group blame the [possible] girl who [possibly] passed on the virus with the line: “Ms. Sleazy set up Eazy to fall”), the song also deals with the passing of several key figures in the group’s life: Little Boo – a sixteen-year-old friend who was killed in a drive-by in front of his home, Wish Bone’s Uncle Charles, and another murdered friend named Wally. There’s also a newborn baby featured in the clip, presumably having died in infancy. They question all these deaths, while eventually receiving the answer from God himself – the unsatisfying: “I ask the good Lord why. He sigh, he told me, ‘We live to die.'”

The idea that even (their) God sighs at the futile nature of life and randomness of death is kinda a bleak lesson to take from this all, but it could also act as a motivating factor to ask yourself- as Mary Oliver once put it – “What is it you plan to do with your one wild and precious life?”

After all, there are always going to be way more questions than answers. It doesn’t mean you should stop asking though.